The Kashmir Radar: In a brazen violation of Facebook community guidlines and despite repeated warnings by the people all across the valley, hundreds of Facebook pages and individual accounts shared the picture of the girl who was mauled by a leopard in Ganderbal district.

Sharing such disturbing pictures on social media has become a dangerous trend among the irresponsible social media users in Kashmir and shockingly sharing such pictures fetches them a few likes and shares which probably increases their revenue.

The Kashmir Radar in the previous month did a comprehensive story, as to “how those Facebook pages earn money by uploading disturbing content, be it a blood stained dead body or a poor girl whom they force to beg for financial support on camera.”

The trend of sharing disturbing pictures received severe backlash when a three year old girl was mauled to death in Ompora Budgam last month, the incident that shook the entire valley but our Facebook warriors earned money from her video and pictures which they shared on their news portals.

The spineless Facebook journalists forced her father to share a video message in which he requested them with folded hands to delete the pictures and videos of her deceased daughter. Shockingly, some Facebook influencers and well known journalists too were involved in sharing her video just after her dead body was recovered from a place where the leopard had left her dead.

Yesterdays incident of Ganderbal again sent shivers down the spine of people in the valley and soon after the news of the demise of the girl was shared on social media, several NGO’s and responsible citizens took to their Facebook and Twitter handles to appeal the masses not to share the pictures of the baby.

Despite such requests, the lust for money didn’t stop our news portals from sharing the pictures of the now deceased baby.

Should we really worry about the Solar Storm expected to hit the Earth today? 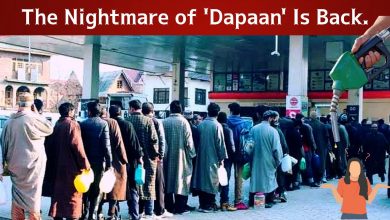 ‘Dapaan Petrol Makleow’ – We and Our Obsession With Petrol Filling Stations Is Out of This World.

Trolling Culture and Our Habit of Mocking our Own People

In a Viral Video, Girls Family Welcome Groom By Reciting Naat In Kashmir

Fact Check: Truth Behind The Viral Video Of A Female Teacher In Kashmir

Elderly Man Crushed to Death by moving train
18 hours ago